Finally!! A good weather weekend!! This summer has not been the best. Lots of rains and temperatures not that summer like. However this last weekend was fantastic: tops of 25°C, no clouds and mild winds.
I had not  paddled the cliffs along the coast of Royal NP before, the south tip of Sydney, and always wanted to. There was a trip for this weekend within the club along this part of our coast so I put my name for that.
The email for the trip said to be ready to paddle at 8.30AM. I have a bit over 1 hour drive to the launching point so on Saturday I woke up at 6AM and it was still dark!!! It is a big effort to get out of bed before 8.00AM for me. Anyway I got everything ready and got there at 7.50 AM. I was the first to arrive so I waited for the others to come before getting the kayak ready to be sure that this was the meeting spot. At 8.30 David arrived but he was not there for the trip but for himself to check the Bundeena Bar (a sand bar inside the bay where sometimes good surfing is possible). He also mentioned that the trip was on Sunday not Saturday!!!
I was there already so I went out with him to discover the bar was off, not a single wave in sight. So we headed out of the heads and along the cliff line. Conditions were sweet with a nice temperature inside and outside the water, almost no wind and a kind swell of 2 meters smashing the lower parts of the cliff.


I wanted to reach a beach some 12 km from the launching point, that was the target for the original trip I was supposed to participate in. However David was not in the mood for a long paddle, after all he just went there to have some fun in the bar. We reached an agreement to paddle to the point where the cliff turned, take a look at what was after that bend and paddle back. When we reached the corner we could see the beach 1 km away so we kept paddling to land there and have rest/stretch/refuel. After 1/2 hour exploring the little beach we started the return leg with a view of Sydney in the horizon. 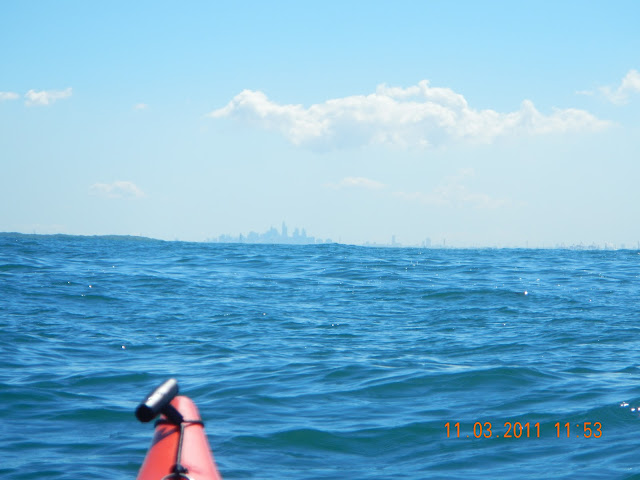 I called the trip organiser to tell him I was not going to attend on Sunday as I did the same paddle on Saturday and instead I was going to try to intercept another trip in the very north of Sydney. This other trip was launching from a place some 2 hours drive from home. I had woken up early on Saturday and I was not going to do the same on Sunday. They were starting from enclosed waters and paddling out to sea to follow the coast north. I launched closer to home, only 20 minutes drive, and planned to meet them at their exit to open waters.
I thought they would launch around 9AM and by 10AM they should be at Box Head. I was there waiting at 10.15 with no kayaks on sight. When a fishing boat came out I asked them if they saw kayaks coming out, they said no, so I assumed they were already ahead of me.
I was feeling the 26 km from the day before and I didn't feel like pushing to catch up so I just paddled very gently enjoying myself, the warm air and the cool water when I felt too hot and rolled

I usually paddle faster but I felt no rush to catch the others, I had all day because my family were not in Sydney and the day was so nice... thou the truth was that my muscles were tired from Saturday :-)
In any case with the no sounds from the sea I felt in peace, a sensation that I used to have when I reached a high summit in the silence of the Andes while enjoying the moment and the acomplishment.
Of course those sensations don't last and when the spell broke I kept going to where the others were supposed to land for lunch. I reached the beach but they were not there, I played a bit in some sheltered rocky shore and then went out to check some waves breaking almost 1 km from the coast, then turned and starting paddling back. After a bit over 1 km I saw a bunch of kayaks approaching. I finally found the other trip. I turned with them and landed in the beach to enjoy lunch with the others.
After eating we paddled back, we parted ways when they turned into the bay to head where they launched from and I kept going South to the beach were I had started.
I was in no mood for a surf session after almost 30km and 5 hours of slow paddling but I had started on a surf beach so I had to go through.