The blog has been quiet for a while, however I have been kayaking, I have had a few adventures and I have written a couple of stories. The problem is that I wanted to share them with Salt magazine, the magazine of NSWSKC. The magazine went out last week and I received it as Christmas present (good timing editor!!). 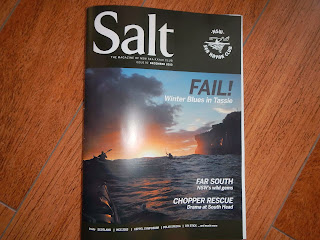 Within the magazine there were two 'articles' I submited. One of them was about an exciting moment 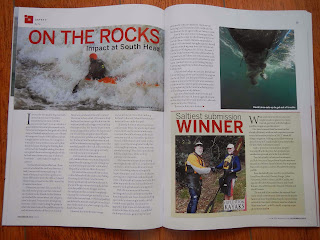 The other was prompted by the editor of the magazine asking me to answer a few questions in the form of an 'article'. 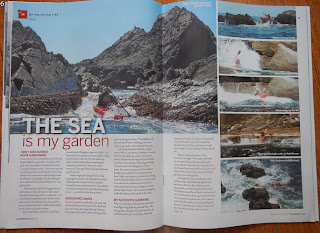 Below I will reproduce the first, minus some editions and the photos that I didn't submit because I had none from that afternoon:


I arrived for this paddle that normally attracts more than 10 paddlers, sometimes a lot more. On this occasion we had 7 turn up which is a good number for some play around rocks. However my hopes for that gradually ebbed away as I looked around at the mix of boats. All composite kayaks with rudders and not a single helmet to be seen. I imagined it would be just a normal cruise along this beautiful coast. During the briefing Rob confirmed my thoughts adding the that there were good chances of seeing whales. He had seen whales almost every day in that last 3 or 4 days… And I hadn’t brought my camera!
We launched and paddled out. The front of the pack was not going far out to sea, just following the coast some 300 meters from the cliffs so I stayed where I like it, closer to the cliffs, some 0 to 5 meters from them J.

There was no wind and the swell was between 1 and 2 meters with some reaching 3.
From time to time I did a sprint from the cliffs to the group and went back close to my silent rocky friends. In that fashion we reached the corner where the ‘dragon’s cave’ is located. I was unsure if going in or not, I didn’t want to drag all the group when the stated aim of the paddle was to try and see some whales out of the coast. Luckily Mark was just ahead of me and he turned the corner to have a look. Of course nobody had to call me twice to go after him into the mayhem produced by the clapotis and the jets of water bouncing from the cliff walls. The smaller swell created the clapotis and some jets of water, the bigger swell hit the wall and created spectacular splash reaching high and far. Those bigger swells spilled the top when ‘felt’ the shallower bottom in our playground.  The foam from the spilled waves mixed with the rebounds creating bigger waves that travelled parallel to the wall. When I spotted that dynamic in the water I positioned myself to catch them and I managed one really nice ride and some not so good.
Unfortunately the rest of the group was just looking, none of them had helmets and their ruddered boats were more designed for speed than for playing. After a little while I felt guilty and I retreated from the rebounds and jets of water.
We started to return but not so close to the cliffs. However the whales were still hiding.
Reaching south head I saw the waves breaking in a nice seducing way over the rocky reef. A few months ago we were coming back from a similar paddle but with bigger surf over the reef. On that occasion I completely misread the waves and got trashed by a wave that broke over my head, that time I rolled and paddled out before the next set could get me. After that day I take more care when trying to surf the south head reef. However this time the sirens songs enchanted me and I could do anything but going onto the reef.﻿﻿﻿

I should have known better when I saw the waves were smaller than what I had seen before but I was still under the spell. Then the incantation was broken and the water below me was being drained. I looked behind me I saw the wave mouth ready to eat me.

﻿ The cliff and most of the rocks were over my left, so I started to paddle as fast as I could towards the right. I wasn’t fast enough and finally the wave caught up with me. As the wave was already breaking and its speed was greater than mine I broached immediately.  I was holding a high brace while surfing sideways over the rocks. I had to do something because my trajectory and speed was taking me straight for the cliff wall. I tried to move my body to turn the kayak and escape the locked position I was in. My idea was to try to rotate it forward to see where I was being taken and hopefully regain the upper hand. You can do that by moving your weight back and stalling the stern of the kayak but I moved my body the other way and what stalled was the bow. I was now surfing backwards among rocks! With the momentum the wave was carrying me I could not hope to stop the boat and paddle out. Soon I was broaching again and my stern caught a rock. The kayak finished the broach and I was again trapped in the spilling wave on a high brace. This time I was already inside the rock garden. I held onto the aggressive high brace as I slid sideways closer and closer to the wall.   I could feel the bumps of some rocks against my hull. I prepared for the inevitable hit. I kept my top knee high and I hoped my hull would take the full force of the hit against the wall when it came. The wave finally squashed my boat against the cliff. The wave surge receded without me.  For an instant I was like a cartoon  character suspended  in  the air. The kayak’s bottom was flat against the wall and me protruding away from the vertical rock sitting in my kayak. Still sideways I fell onto the water. I touched the rocky bottom with my paddle and while my head was still above the surface I took a quick look to see if I had time before the next wave. I went for a roll.
The moment before I tucked in to set up for rolling I was hoping I had enough depth and that I would not hit any rock while performing the roll. I wasn’t lucky, neither unlucky. My helmet hit something and my arm brushed the seagrass on the cliff wall. I rolled up and before I could manoeuvre too far from where I was the next wave came and carried me some more meters above some more rocks to finish a perfect uncontrolled side seal landing on a rock platform.


I got out of the kayak and I signalled Rob I was ok. Then I dragged the kayak to the other end of the rock platform to relaunch on the calm side of the bay. The rest as they say is history J