How many times can you expect a big company to honour the warranty? 1, 2, 3 it has been 4 times already!!! I have a new camera every 2 or 3 months and this time I got the newer model!
The only problem is that the warranty lapses after 1 year... or they renewed it with each new camera they sent me? Because every time my Nikon AW100 leaked I had a brand new Nikon AW100 sent to me free of charge within 2 weeks.

Before I moved I was collecting all the boxes from all the AW100 I got. 4 boxes, the first I lost, the others were replaced. However I threw all but one away when we changed house. I have started the collection again now, only this time one box is for the old AW100 and the other for the brand new AW110. 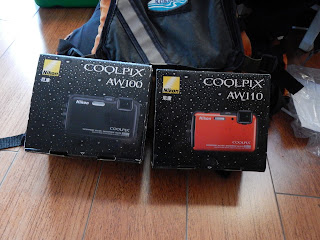 The funny thing is that I know of other paddlers having the same old AW100 with no leaks for a long time... Is it bad luck or bad user? In my defence I can say that I use it in the surf on the kayak's deck 2 or 3 times a week and they don't... well that average has dropped a lot lately with the winter and my 'could be better health'.

I have been taking the camera to Nikon's office my self and then they used to send me a new one. Last week I took the drowned camera to them. A longish drive and when I got there the office was closed and a sign said they had moved to a new address closer to my home. The new office is 200 meters from the Parramata river. My place is 400 meters from the same river.
When the other day I got an email saying the replacement was ready to pick up I decided to paddle over the 7km instead of driving around 12km each way. Not my cup of tea for a paddle on flat water but still 'a day in the water is better than a day not in the water'. It was a placid paddle with very nice 'winter' temperature of around 23 degrees and sunny :-) Now I am thinking of getting a K1 to take advantage of those kind of paddles more often with less hassle (lighter kayak than a sea kayak, more core exercise and less gear to carry). I just need to find a cheap one to convince my wife to let me get it. Do you know of one in Sydney?
2 comments: