A long time ago, well not so long ago, I wanted to paddle across from Barrenjoy Beach to Central Coast. It is the exit of a river system into the sea, some 4km wide. At that time I had my slow very stable kayak and I still had very little experience in the sea.

As soon as I went out of the protection of the heads I felt the current going out and the wind coming in. The wind against the tide made for some steep waves, some white cups and a lot of apprehension of going further out, so preservation took charge and instead of doing the crossing I followed the coast of the river. When I felt a bit safer I started the crossing but not even 500 meters from the coast the waves were exceeding my capabilities at the time, so I just came back.

Since then I have made the crossing many times but those waves left a mark, they were almost standing in its place and I wanted to come back and surf them.

I have never found similar conditions again... until last Saturday, or that is what I thought. The forecast was 2-3 meters swell from NNE and wind N 10-15kn changing to NE 15-20kn. The high tide was at 11.50AM so I was in the middle of the channel at 1pm with some current going out
Some swell coming in
and waiting for the stronger 15-20 kn wind that never came.

So I approached an island in the middle of the channel where the shallower sea bottom helps the swell to get some extra height and did some surfing. 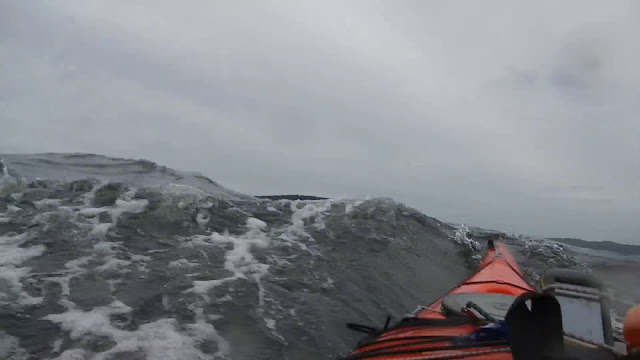 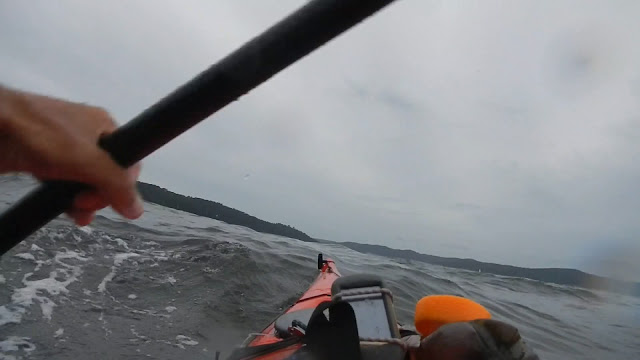 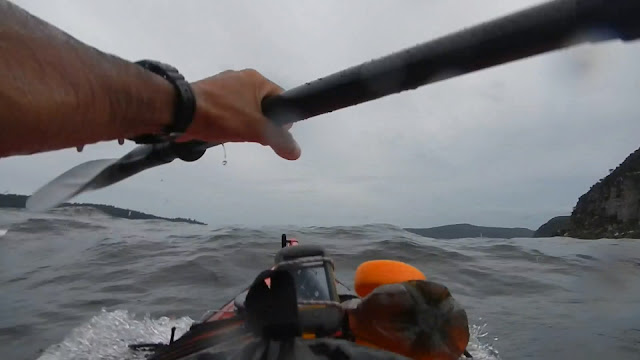 They were not quite standing waves but as close as I got so far in this part of the world. But I am certain of one thing, I will keep an eye on the forecast and I will be back!!!
No comments:

When I started kayaking, back in the 80's, the wing paddle didn't exist, so I learned to paddle in sprint kayaks with euro blades. When I was around 18 the "new" wing paddles got to our club but you had to buy your own and they were expensive, so I kept using the euro blades. When I did my incursion into white water there was no question of what paddle to use (no wings of course).  I hadn't heard about greenland paddles until a few years ago and by then I was very used to the euro blades. I can paddle with a wing or a greenland but you need a different technique with each different paddle to get the most of it so I prefer to stay with the euro as my main and the spare paddle.

I am not into the history of kayaks or tradition of kayaks. I am not interested in making my own paddle or my own kayak. But I am interested in the challenges of rolling and the bio mechanics involved.
I have a confident sweep, backward finish roll on both sides tested in many surfing sessions, so I can now focus on the "luxury" of trying some more extravagant styles of rolling and once mastered enrich my repertoire of "combat" rolls.

On Saturday, as my wrist was a bit sore, I decided to skip the paddling and take the kayak to the bay and work on my "luxury" rolls. My family came along and after taking my kid for a paddle: 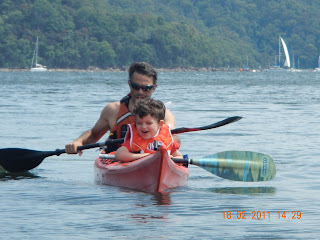 I asked my better half to record me as a way to see what I am doing wrong and try to correct that.
In order to get a hand roll with a flowing motion (as opposed to pushing with the hands and doing a lot of splash) I gathered that you need a balance brace, which came very easy to me when i first tried. What still doesn't come easy is the recover from the balance brace without helping myself with the paddle. Here is a small video showing how I fail at the recovering:

and this is how I "cheat" it with a small splash of the paddle at the moment of moving my torso onto the deck:

Then I tried the full hand roll and this is what I got:

It looks good, doesn't it, but I am in the shallow and a small brush against the bottom was enough thrust to finish it :-(

Then was the time to try a couple of storm rolls, first my strong side:

and then the off side.

Taking into account that this is the first time I try the storm roll, I think it was not that bad, but still needs a lot more working...

I tried a back deck roll but was too awkward and it failed miserably. No video of this as my wife was chasing my kid.

The other good thing about this session is that I stayed close to my family and in some ways they were included. 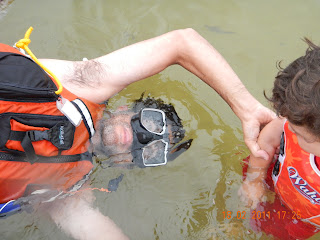 Do you need a licence to paddle a kayak at sea? Not really unless you want to participate in certain activities organized by NSW sea kayak club, and I presume other clubs. That "licence" is called grade 3 or sea skills.

Last Saturday Stuart gave his time, as volunteer assessor, to assess 3 new aspirants to this level. The 3 aspirants were Mark, Chris and me.
We were to be at 8AM ready to paddle at Bundeena. From my home it is almost 2 hours drive so I decided to go the night before and camp. I drove to Audly where I could not go on because the river had flooded the road and there was a car stuck half way with water to its doors. Short after 11pm police came to officially close the road and when asked they said that by the morning it should be clear again. So I camped near by.
When I woke up the river was a lot lower and the bridge almost clear. However police were there to make sure nobody tried to cross until the all clear was given. I drove to the entrance to the National Park and waited there. I thought that most of the others would come through this road and I would meet them there. However only Chris got there and at 8AM the road was still closed and nobody else appeared. We moved to the very start of the road going into the park from the highway and there we saw a sign about the closed road and to take the road through Waterfalls... If we had known about that before...
Anyway, we arrived to Bundeena at 9AM where the others were waiting. We unpacked the kayaks, got changed and the assessment started by checking the gear. Then we paddled out towards Cronulla beach.

The paddler has to show several skills, among them you need to perform an auto rescue (jump into the water and get back into your boat) and the assisted rescue (get back into your boat with the help of another kayaker). However before we got to Cronulla we spotted 3 sharks and while they don't usually  bother with people (we are not in their menu) I didn't want to be swimming among them in murky waters (they don't have very good sight and may confuse you with a troubled fish, which is definitely in their menu). We left these exercises to the end when back in the harbour.
When we got to Cronulla we had to show our skills in the surf by landing, launching and rolling. Below is my go at that:

After that we needed to show some maneuverings skills (paddle backward, turn the boat 360 degrees, paddle sideways, etc) and how to tow another kayak

When we made it back into the harbour we did the rescues exercises and got off the water just in time for the storm to wash the salt water off the kayaks.
After changing into dry clothes we all headed to the pub where Stuart gave us his feedback on what he saw and stamped all of us approved to paddle out in the sea.

Next time I come across bad weather can I show it my new licence to shush it away? :-) I think not...

Below a few pictures of the day: 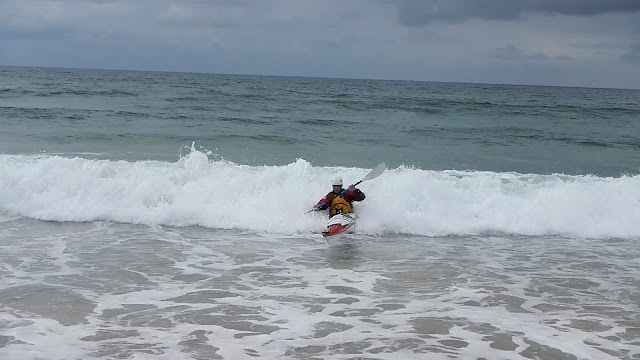 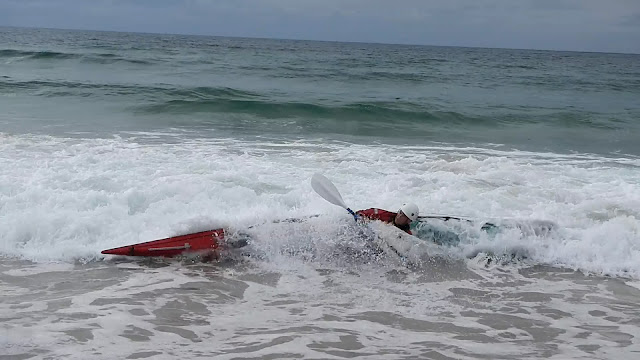 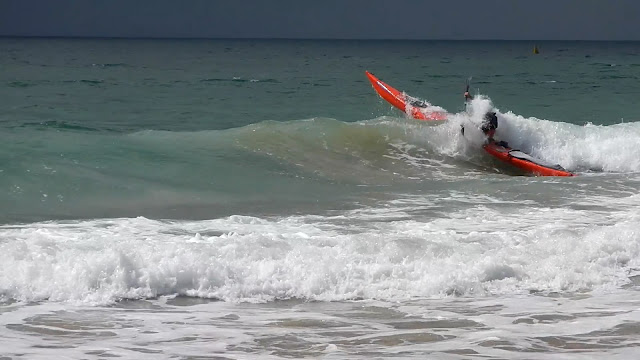 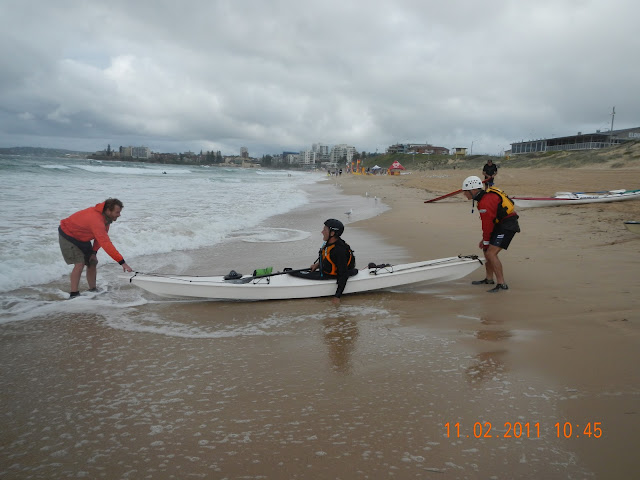 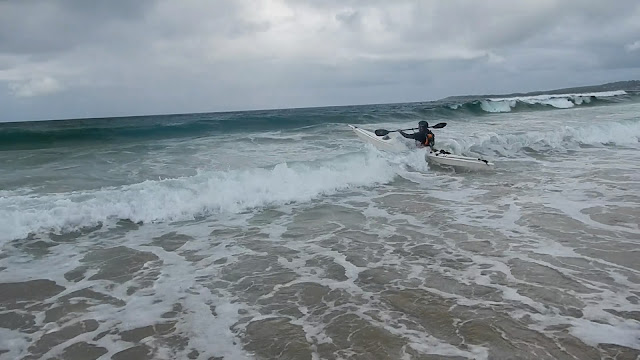 My kayaks so far

As I said in a previous post I grew up kayaking in the delta. My first paddling in a K1 was when I was 9 and short after was my first regatta.

When we moved to Sydney some 5 years ago, I used to borrow a kayak from a friend:
I used to paddle that kayak once or twice a month. I rode my push bike to his home and went for a paddle for 1 or 2 hours within the Sydney Harbour.


Almost 4 years ago my asthma got so bad that I finished in the hospital for a week. When I got admitted I could not walk more than 10 meters without running out of breath, I was coughing all the time to the point of not being able to sleep and I had lost almost 10kg, in hindsight the weight loss was because the lack of energy to get to the kitchen to grab something to eat.
While in the hospital my wife said as an incentive for me to get better that when I recovered I could buy a cheap kayak. It did the trick because I got better and bought from eBay a cheap kayak that would fit in my garage:
Previous to this kayak I hadn't have much experience in the ocean. I had plenty in flat water even in storms and with lots of wash rebound from motor boats going around. I had paddled in some in white water, but very few in the ocean.

The kayak was not what most people call "sea kayak" but it didn't stop me, besides, for me paddling in flat water felt a bit monotonous. The kayak took me out in the ocean and never failed me. However I didn't go out when windy or the weather was a bit cold. I took it as a summer sport.
Two years later I had paddled all the coast of Sydney and I wanted to meet other sea kayakers. I found in the web about the NSW sea kayak club but they didn't accept me because the kayak was not up to the club standards....
I didn't agree with that but gave me the motive to get some budget from the home finance minister to upgrade the kayak.
I tested a few but when I paddled a Mirage 530 I felt it flew so I bought a second hand one:
After 4 months with it out relationship was sour. We didn't get along very well, it was fast but not manoeuvrable, in bumpy waters I didn't feel comfortable and I got sick of sanding after each scratch on the gel coat.  We parted ways.
So the search started again but this time I narrowed the possibilities to plastic and playful. After testing more boats I got a Valley Aquanout LV:


It has been a bit over 1/2 year and apart from the fact that its hatches are not as waterproof as they were the first weeks, we are in love.
No comments:

A couple of weeks ago we, me and four others, went for the weekend down to Jarvis Bay and paddled around St Georges Head.
The forecast wasn't nice with showers for both days, but the sea conditions were not bad. In the end the rain only came at night well after we were sleeping and stopped when we woke up.
Here is a compilation of pictures from my camera:


and this a compilation from pics taken by Barnabas:

And last a compilation of vids taken from my camera. I apologise for the shaky images but it was a bit bumpy: