The light at the end of the cave


Usually this time of the year is good to go whale watching but I have not been lucky with the wild life sighting this winter. No dolphins and only two whales in the whole season.
With the sea so flat, the wind nonexistent and my bad luck with the sea creatures I decided instead to stay close to the coast and loose some more plastic from my boat :-)  I put in from 'my beach' and went to play with some rock formations that you can never get intimate with if you want to keep your boat in one piece.

After playing for a while in the rock garden I paddled a few kilometres to visit the local sea cave. With normal seas you can't stay close to its entrance as some waves break there. In calm conditions you can get into its first half, until it bends and narrows down. However this day the sea was not even calm, it was flat. So in I went, and kept going to the end of it.


When the tide is low you can't get to the end as there are rocks. When the tide is high you may hit your head against the roof. But when tide is right you end up in a nice small pool.
I was enjoying myself in the pool marvelling at the water falling from a couple of streams, the echoes coming from inside the cave, some birds' nests on the cliffs... And then it came. A wave not as small as the others found its way through the tunnel and grew in size as it got compressed between the walls of the cave. It got to me and the tranquillity became a rush to avoid the walls and to stay upright. Nothing happened but it made me remember that I was in a tight spot where I could not completely relax. After few more minutes absorbing the uncommon environment I found my way out. 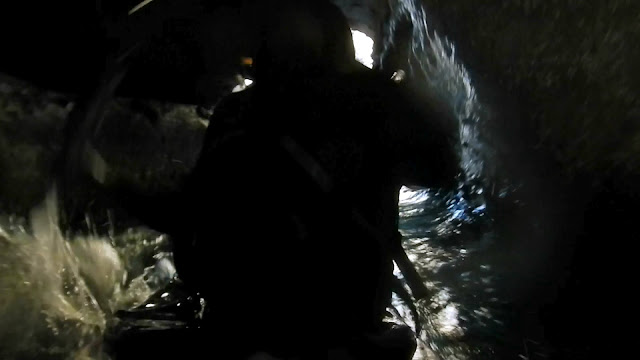 While I was editing the video I realised the many different kind of strokes that you need to blend to manoeuvre in a small space and go or stay where you want and not where currents want to take you. A fun afternoon despite the calm conditions.
Below you can see the quiet visit to the cave and the rude interruption by the wave at 1.18.

A kayak surf session to get fit again

I was out of action for over a month. Not only out of action but also in bed for a week. An operation to remove polyps from my sinus was the cause. That left me out of shape more than I though.

As soon as the doctor said I could paddle but not get into the water I organized to go out with a couple of mates. It was shameful to keep them waiting for me. At the end of the 16km I was totally worn out. After returning home I took a good 3 hours nap and went back to sleep early that night. In my favour I can say that later in the week I was with a cold so that may explain it :-)

After that I went paddling by myself a few times in the protected waters of the bay to gain back some fitness and last week, after the doctor said I could go into the water again, I went for an 'interval training' in the surf.

﻿
I also finally managed to get a new camera. After testing many (Olympus TG810, Pentax WG2, GoPro HD 2, Sony TX10, Nikon AW100) I decided that for what I mainly use it the best all round was the same I model I have lost, the Nikon AW100. So that paddle was with my new camera, the video below is the fun I managed to have (some of it is a bit out of focus because I forgot to change the autofocus but I liked the undesired effect). I have been playing with zooming and slow motion effects in the editing so there is some of that too.