Summer is over. It is not just the calendar showing the 3rd month of the year but the weather too. Specially during the last few week ends. Weekdays were mostly good and weekend were definitely not good. Lots of trips cancelled due to bad weather. I tried to go out anyway but some days it was a bit rough to venture out by myself but really good if I could gather 1 or 2 more to keep an eye on each other.

Last friday the buoy readings (a buoy that measures the swell some 10km from the coast of Sydney) at the time were of median swell of 4-5 meters and tops of above 10! The forecast for saturday was with strong winds and high swell. I sent the call out to see who wanted to go for paddle. However everyone had either the kids or the work or something else. I think they were just afraid of the big waves :-) Anyway, my wife was also afraid of the waves and asked me to stay home. Good excuse, right?

Sunday again a rough day but nothing could keep me inside. I went to Palm Beach thinking "if it is too rough I can launch from the bay side which is only 500 meters away and stay paddling in the protected waters." When I parked on the ocean side there were signs of 'beach closed' and not even the surfers were doing their stuff. Is that a bad sign?

I changed into the 'rubber' uniform and dragged the kayak to the shore. There I had the first surprise of the afternoon. The beach was mostly white. Covering a good portion of the sand was a thick layer of foam.
Of course beyond that was what looked as angry sea. I though maximum that can happen is coming back swimming, right? So in I went.
The first line of breakers were some distance away but the white water kept rolling with strength and when hit me the water bottle was taken from my deck. I usually put it inside to go through the breaking zone but I had forgotten. I quickly fished it out and opened a bit of spay skirt to throw it inside. That was the moment the next wave decided to launch its attack. It put my kayak on the side and pulled the spray deck out of the rim. The synchronized attack of the waves went on relentlessly and right after I realized my skirt had come completely off a bit bigger roll of white water engulfed me and filled the kayak with water and me with foam. I made a strategic retreat to regroup on the sand.
After removing the disguise of broken washing machine and empting the kayak I prepared to start my counter attack. The strategy: frontal charge, but without water bottle on deck.

The combat was ferocious with great display of strength and tenacity from both sides. I managed to advance a few meters to be dragged back a portion of that, another bit forward and another bit of forced retreat. A ball of foam was blown to my face, my enemy was playing tricky now. I managed to clean it with my hand just in time to see a breaky washing me completely and send me back again.
It took me while. In the end I made it out of the surf zone, although the waves kept breaking out there. My spray skirt had imploded and during the heat of the battle I had not realized. My kayak was half full of water. Luckily my electric pump was still working. After emptying the boat I paddled a few kilometers against the wind.
I didn't want to paddle too far from the coast but I couldn't stay too close. With so many storms lately, many sand banks had formed just out of the beach and suddenly big waves were breaking like surf where they shouldn't be. Also the water was not the normal grey color the ocean has when it is stormy. It was murky, brown like a river, even a few hundred meters away from the beach.

The forecast didn't mention anything about thunderstorms but after my experience last December I didn't want to take any chances and when I saw a few darker than the rest clouds I came back.

While approaching the landing I was thinking "I am going to be trashed, I just hope I don't get hurt." Well, I didn't get hurt and neither was trashed. I managed it pretty nicely coming in the lips of a wave and stopping before it broke. Then I got lucky and a lull allowed me to paddle all the way in until I landed. 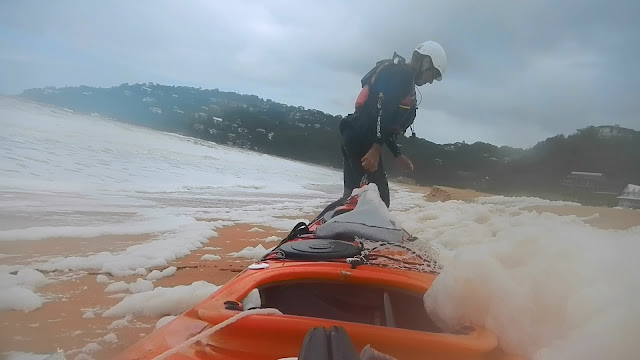 An interesting afternoon with lots of foam and river color like water on the ocean.