The best paddles in kayak this year have been those where I learned something. Either by chance or design, all those paddles have been in the surf. One of these sessions happened last weekend during Klanacopia.

Klanawhat!?!!? Exclaimed my wife when I told her that I would be away again during the weekend.
Klanawhat or better known as Klanacopia is a kayaking event run by the guys at Central Coast, in the Hunter Valley region. The group is called Hunter Kayak Klan. Although not strictly where I live, it is not far by water. I participate in the discussion on their forum and in some of the paddles.
The event runs for Saturday and Sunday and for some it started Friday night. Saturday is focused on skills and Sunday on relaxing and mock around with different boats. Some call it 'testing boats day' but as I don't have the money, room in the garage or wife for another kayak, I just call it mock around.
The skills training and the boats to play with are provided by Expedition Kayaks. Rob is one of the instructors and I usually paddle in a group led by him. When this year Klanacopia was being organized I asked him what was he going to do as skill practice. As I am training to get my Sea Leader badge I wanted to know if the skill practice was going to be more beneficial for me than leading a trip I could do during the same weekend. Rob offered me to help him in the instruction and I happily accepted as I wanted to attend the Klanacopia and by "helping" Rob I would learn some tips, apart that it was going to look good in my log book.
In the end I only helped him during the morning because in the afternoon Mark took us for an "interval" training that didn't require assistance, except from the breathing machine.
The morning was good. We did some surf practice and later some rescues and self rescues. However for me, the rescues started right away when the surf practice had barely started. The plan was for Rob to manage all of us from the beach while Joel and I gave tips to catch the waves. I think in reality Rob wanted to stay dry as long as possible that morning :-) In any case I paddled out last from the beach, stopped a bit after the breaking zone and I was still settling my nose clips when I saw a double capsize. I started to paddle slowly to them. I was about to tell Joel to assist one while I was going to assist the other when Owen did a reentry and roll and paddled back to the beach.
The other swimmer was still in the water, within a rip that was taking her slowly to the corner of the beach and the head land with its rocks. I approached her to assist with a rescue but the waves didn't give us time to complete it and I told her to let go a second before the next wave broke on us. If she hadn't, the wave would have hit her in the back and pushed her boat on top of me. After the wave passed I approached her again and I heard her breathing hard. I decided to get her out of there and worry about the kayak later. I asked her to jump on my rear deck and carried her to the beach.
Even though she is a small woman the kayak felt very different to surf. I wanted to catch a wave and surf all the way in like the life savers do in the movies but instead I had to paddle all the way, sweating every inch to the shallower water where she jumped off and walked to the beach. I turned around to check where her kayak was. It was getting closer to the rocks. I paddled to it and hooked a short towline. This time, coming back in was even less elegant that carrying her. The other kayak got carried faster than me with each wave, pulling the linking rope and pushing my boat diagonal to the beach. It got sideways and kept interfering with my paddle. When I finally managed to land I saw Owen's hand all red. A small cut was painting all his hand red, however not even 20 minutes later he was trying to catch the waves again, this time without any swimming 'rests'.
We stayed surfing for a while, catching some long, smooth runs between 'tips' given. When Rob called all to the beach, he asked me to stay catching the waves closer to the beach. He murmured something about showing something to the guys. I tried to surf with good style, leaning and turning but those waves were too small to carry the kayak and I had to push hard to stay on any of them. I don't think I was a good model except on how to do a good cardio training.
Then they all launched again. 1, 2, 3, 4 paddler out but the next one capsized still trying to break free of the surf. I was close by and assisted with the rescue, this time fast enough to avoid the next breaking wave.

We paddled a couple of km to a point where the swell created some rebound against the rocky headland. That was the set for the next part of the training. First some rolls, then some rescues for those still in the water. Then Rob said "All jump to the water and get back in your boats on your own." A few puzzled looks and someone who asked "all of us? me too?", "yes, all of you" was the answer. Some went back fast into their boats, some needed assistance. One of those needing help tried a couple of reenter and rolls but was still swimming. Then a few attempts at cowboy reenter (crawling from the back deck like a cowboy mounting a horse) also failed. Rob and I were close by and the three of us were getting close to the head land. Rob told the swimmer to link his boat and mine from the toggles using his arms so I could drag him away from the rocks but he didn't knew the manoeuvre. We made an attempt to explain it to him. We were getting close to the coast. Another failed attempt to explain what he had to do and I initiated an assisted rescue while Rob dragged us away from the wall of rocks.
We all paddled back, had lunch and were ready for the afternoon session which was not so memorable except when I miss timed a wave close to the rocks and landed on a boulder 1 meter to the side and 1 meter above from where I wanted to go through. Don't get me wrong, the afternoon session was useful but personally I didn't learn as much as during the morning.
What did I learn? Well, I did my first, and second, real rescue in the surf, so I learnt I could execute under some pressure procedures that I only knew in theory. I also got another lesson on how difficult is to communicate with someone who is in the water after not wanting to be there (capsize from surfing or failed self rescue).

I didn't make a video or took photos because my camera decided to die two weeks ago (I took it to Nikon and today I received by mail a new one). So I borrowed the photos used above, thank you Martin for let me use them.

During the evening we enjoyed some beers, pizza, videos and presentations prepared by some klanners and above all good company. There was also a presentation from 'take 3 for the ocean'. Basically, they guy first made us feel horrible about how we ALL are killing the oceans and its creatures with plastic rubbish. Then he tried to cheer us up saying that if we take 3 pieces of rubbish every time we leave the beach or waterways, we may still save the seas and the creatures living in it.
Two things struck me most from his talk: all the plastic that finish up in the ocean doesn't degrade (I knew that already), with the water motion it breaks in pieces so small that finishes up as the base of the food chain. Many animals think the little things are food instead of pieces of our rubbish. In this way plastic is contaminating and killing by poisoning many animals in and out of the sea.
The other was a photo that reminded me the 'prophet' penguin from the movie Happy Feet, the one with the plastic ring around his neck. I guess seeing it in cartoons is not the same as a real picture. 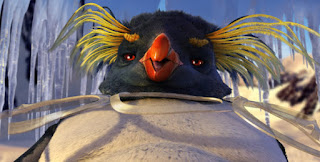 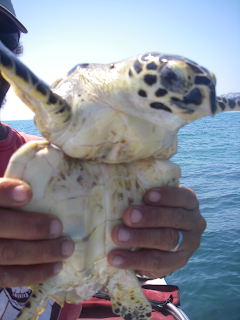 Please, visit the web page http://www.take3.org.au/ and next time take some rubbish to the bin, even if it is not your rubbish it is your community.