I had been monitoring the weather and the forecast was of strong winds. In the past we had windy evenings but too many paddlers so going out was too dangerous with such large groups and we stayed in the protection of the harbour.
The call for this Tuesday was made on the same day and with the mention of strong winds warning from BOM. The road to the meeting point took me over the cliffs and the sea looked rough. I was hoping we would not be too many so we could go out to battle the elements.
I was relieved when I saw only 4 kayaks and even more when the other kayaks belonged to strong paddlers. However my good feeling only lasted until Matt turned the VHF on and we all heard the story unfolding of a Yatch with problems to come back. Apparently its engine was not working and the skipper was not confident to sail into the harbour with the strong wind present at the time.
Rob said that with the emergency services were being stretched thin (there was another boat with problems) if we were in trouble would be by our own. In the end the call was to paddle out and try a few manoeuvres before leaving the security of the heads. We started going against the wind, turning and going out.
Within the harbour the wind blew hard and many wind waves, up to 50 cm, were being blown with white cups. Arriving to south head we had the respite offered by the high cliff but we pushed on and out we went against the howling wind. Some small, some not so small and some very big waves were coming against us, sometimes spilling over our bows and reaching our skirts.

We stayed close together, working our way forward. At times the gusts were really strong and you had to paddle really low to prevent the paddle being blown away. At one point I was moving the camera and the wind cought my paddle blowing one side up and buring the other into the water, I almost went over... In other sections you felt the wind coming from the side and was hard work to keep the direction, often leaning heavily and paddling on one side only.
We then turned around and just as we were getting ready to go down wind a big one spilled over Chris, taking him forward some 10 meters, releasing him and taking Matt along 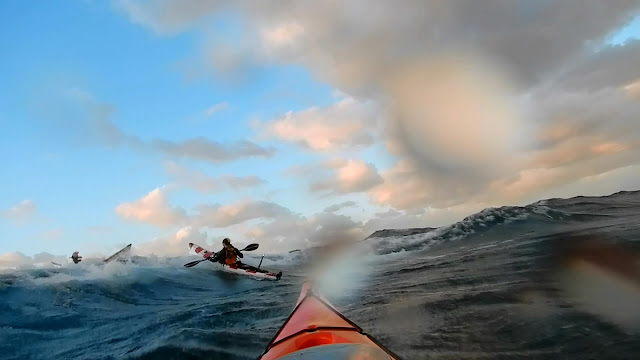 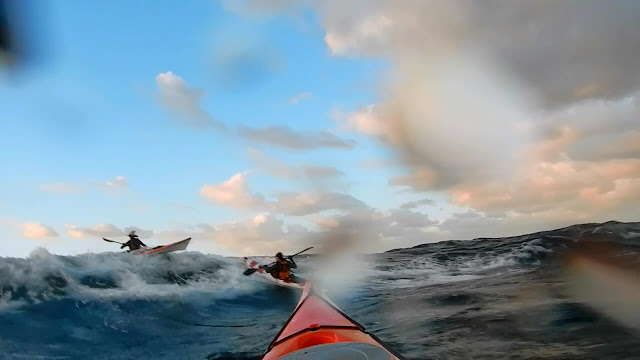 The surfing back was quick and very sweet with the sun going down over the cliffs. 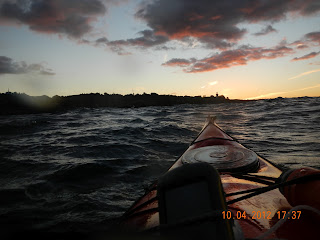 We paddled an average speed of 5km/h against the wind and 10km/h coming back. According to my GPS my kayak reached a max speed of 26.6km/h. Later I checked the observations and the wind had been blowing between 18 and 25 kn with gusts up to 32kn and the average wave was 4m with peaks of 7m according to Manly Hydraulics buoys.
Back in the relative protecction of South Head he practiced a bit of rolling

It was a very satisfying paddle and I was happy with my own performance while facing the roughest sea I have been in so far.