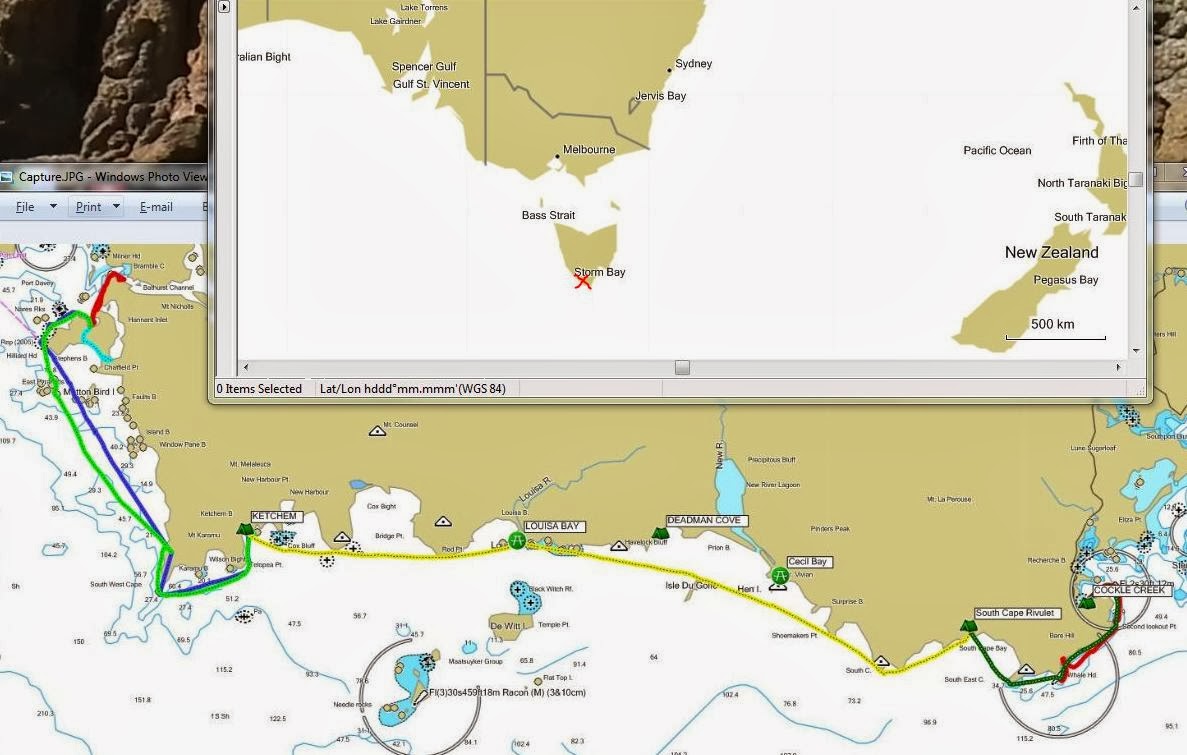 My surroundings are shaking. I hear a voice commanding me to wake up. I open my eyes and darkness surrounds me.  I manage to take a look at the watch, it shows 4AM and I realise I am in a tent. Am I back in the army? A few seconds later I come around. The sergeant ordering me to wake up and shaking the tent is Stuart, the trip leader. I remember I went to sleep around 6 pm last afternoon. I had been paddling from 7.30AM to 4.30 PM the day before and I fell asleep before the forecast on the short wave radio at 7.30 pm was transmitted. Still half asleep I deduce that the forecast brought bad news and we need to move soon.
Packing stuff and tent is done quickly after over a week of repeating the process and by 5 AM we are dressed with paddling gear, wet from the day before. We are ready to move the kayaks under the light of the moon. Today’s briefing is about “going one behind the other like ducklings following mama duck”, so if we capsize while sailing 25knots winds from Antarctica the one behind might be able to help us. We launch through the very low surf, still not stirred by the strong winds that were to come later during the day.

The last forecast I had heard was for bad winds today and even worst tomorrow. We’d hurried the way back skipping a planned detour to Maatsuyker Island (the second time we plan but can't go to the mythical island) and a couple of overnight spots. That meant that yesterday’s paddle had been stretched to cover a bit over 60km, and that was after the 40 km of the day before. It was that or risk being stranded for days in a beach until the weather improved. At least a good part of yesterday's 8 hours of paddling had been sailing with moderate winds and some small wind waves to catch.

Today is the last day of the expedition. Expedition sounds too grandiose? Well, it was for me. Hopefully this last day will become an exciting paddle with the promise of strong tail winds. By 5.30 AM I am completly wet after not being able to see in the dim predawn light a small wave that broke in front of me. It run over my deck to wash my face with cold salt water. Just what the doctor recommended to be fully awake. We paddled and paddled that day. All the time the sails deployed while we expected to fill them with the wind that never came. By 9.30 AM we were back where we had started a week and a half ago.


For me it was an endurance trip. No, I don't mean endurance in the sense of a long resistance aerobic paddle, which it also was, but that I endured it instead of enjoying it. The first day we had head winds and half way through my wrist was sore. I was slowed down by that and demoralised by the fact that I would not be 100% the rest of the trip. It didn't help that the paddlers at the front disappeared over the horizon. John, Michel and me followed the direction were they'd disappeared until we realised we were paddling past the landing beach. We turned, put the sail up and the wind that had hinthered our advanced took us back to where we were supposed to be. The extra few kilometers paddled, being left behind out of sight from the rest plus arriving at the beach and see that it appeared that nobody cared and almost everyone was already in they dry clothes preparing their food and didn't offer a hand with the boats didn't help my morale.


The following days were not better for me. We had a good window of weather (side winds or soft head winds) and Stuart wanted to take advantage of it. We kept pushing west. I needed a rest day to recover my arm that ached more each day and to recover my strength. There was none of that. We kept relentesly pushing west, farther away from our cars. The third morning was my lowest point. I had not slept well. When we woke up I was a mess. I was tired, clumsy and disorganised. I spilled water on me a few times while filling my water bottles and had to repack the boat a few times because I had forgotten something out or I could not fit my bags in the hatches. Everyone was ready on the beach except me. I was still struggling to fit my stuff in the boat and my mood was sinking fast. Stuart confirmed the objective for the day. It was Maatsuyker Is. which involved an open crossing, the weather was supposed to be low winds and possible thunder storms. The possibility of thunderstorms was the tip that filled my glass and I voiced my decision of not going. My mental state, my clumsiness during the preparation plus my last experience with thunderstorms was too much to bear by my self. I told the leader I was not going on an open crossing on my physical/mental state and with thunder storms. They could go and I would camp there for a week until they were back was my offer. Stuart didn't accept that and changed the plan to go by the coast to the next camp site, leaving the island for the return leg. He added the condition that we would look shelter at the first sign of lighting. I wasn't happy but agreed to keep going. After another couple of attempts to put everything in my kayak we started the day. The place where this episode happened is called Deadman Cove, very descriptive of my state.


Another couple of days paddling 30-40 km and we finally reached the main objective of the trip, Port Davey. I finally could take a couple of days off and stayed at Spain Bay, the first camp inside the huge harbour. I stayed with Wade who was also suffering from an injury in his wrist. We did a nice bush walk over the hills to one of the open ocean beaches nearby where we climbed some big dunes and discovered several piles of shells, signs of aboriginal mounds. I also did a small paddle to check out how flat the water inside Bathurst Channel was and rested and ate a lot. After 3 days of that easy life the rest of the group came back. While I rested they went on paddling the flat waters of Bathurst Channel towards Melaleuca Inlet and Bathurst Harbour.

The return was a dash to be back before the bad weather system arrived. I was feeling better after the rest days and with the knowledge that we were closer to the finish line with each stroke.

I must admit the area is beautiful, with very scenic and spectacular views. Islands like cones, cliffs that sink into deep water, channels to run between small islets, seals, etc. There were good moments of fun and camaraderie too. But all that was second or third concern during a trip that was all about getting there and back with very few possible landing points on the way and the threat of bad weather looming all the time. I got back with food treats that couldn't be consumed for lack of relaxed time. I learnt a few things and set 2 personal records I am in no hurry to break: my longest paddle in a day with 60.7km in almost 9 hours and the earliest paddling being on the water by 5.30 AM. 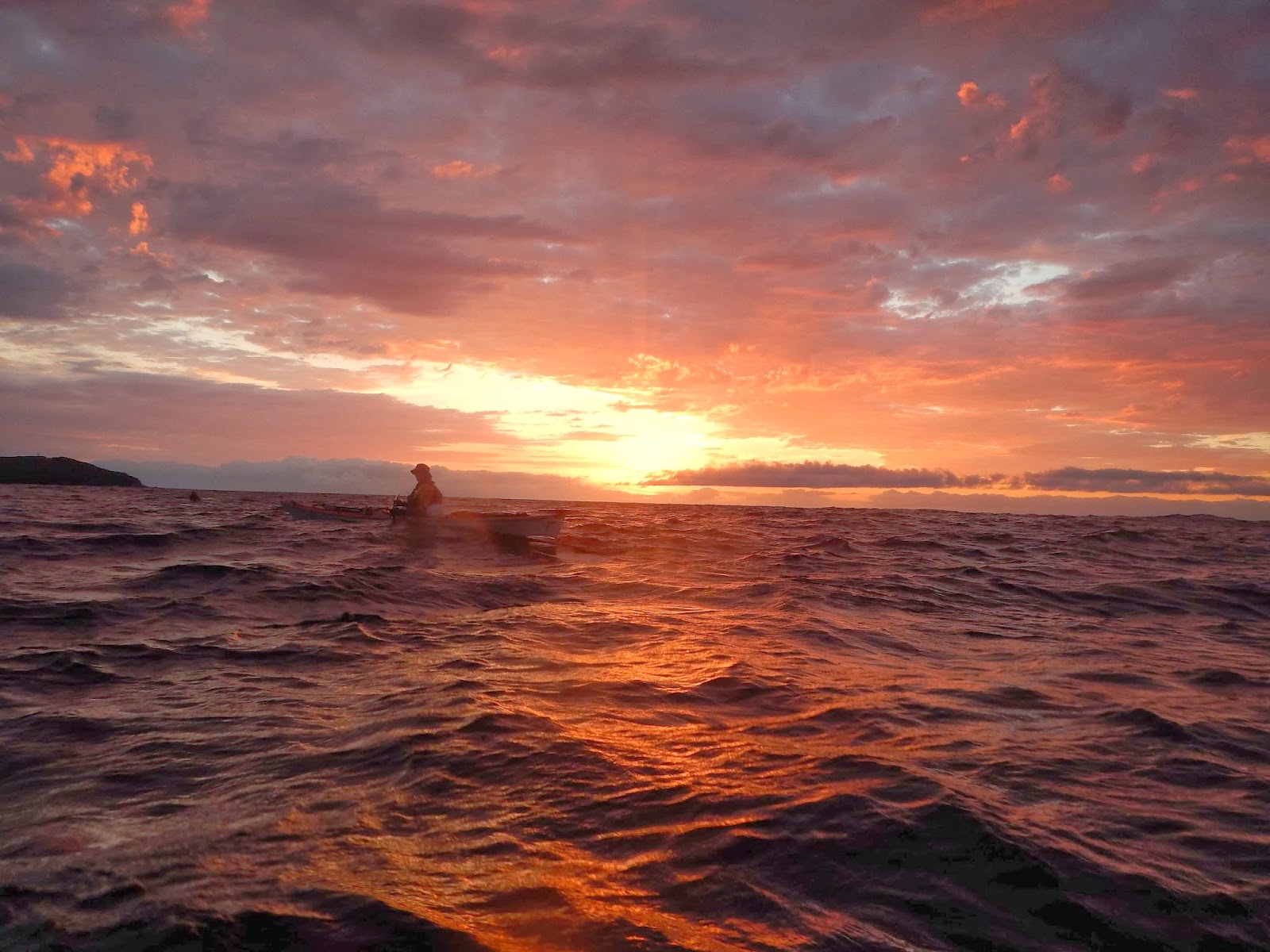 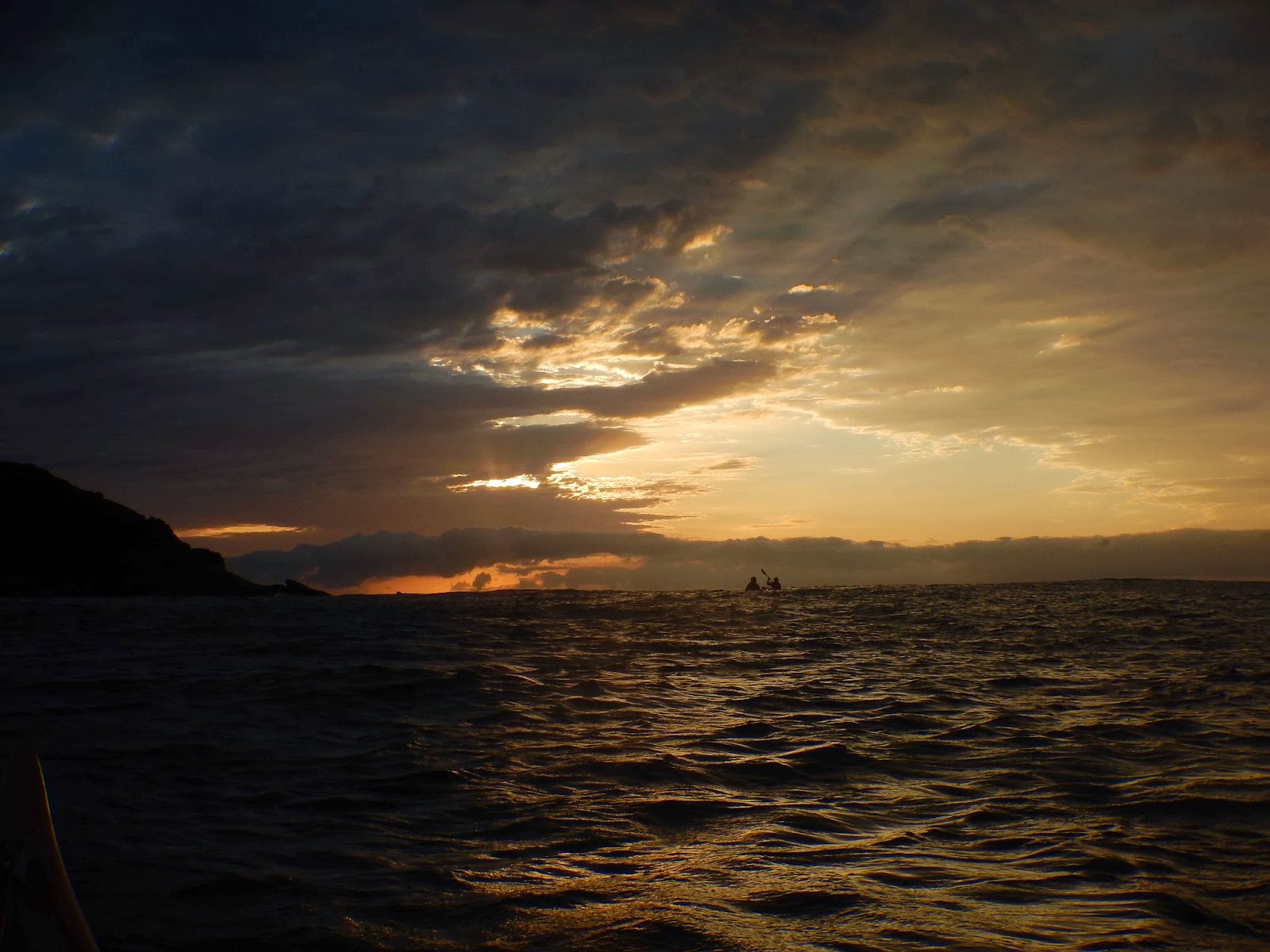 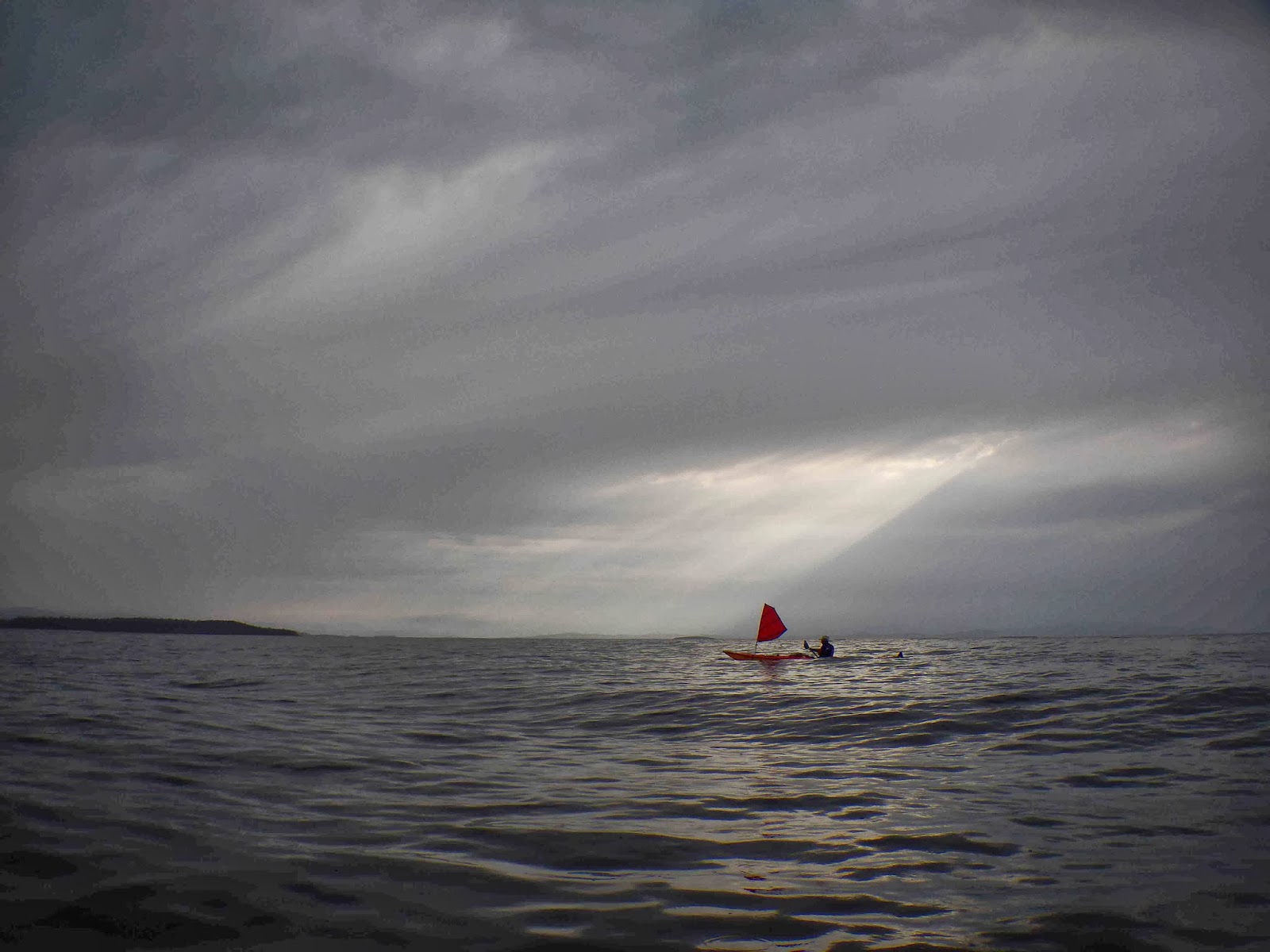 It is definitely not my style of paddling but it is something that I had to try at least once. I am happy I participated in this but I am not eager to embark on another expeditions of this kind. I thank Stuart very much for the opportunity and his effort in leading us in this adventure.

Some of the numbers from the expedition:
Carried 20kg of food plus water plus gear.
I paddled 8 days and rested 2.
I covered approx 260 km in about 43 hs of paddling.
We were 8 paddling the first day and 6 returned paddling the last day (1 returned paddling after the 1st night and 1 returned by sailboat at the half way point due to injuries).
We drove from Sydney to Melbourne, 10hs or around 900km. We took the ferry to cross Bass Straigh, 11hs or around 400km. We drove again from Devenport to Cockle Creek, 5hs or almost 400km.
Of course, all that in reverse to get back home... Well... Almost. Spirit of Tasmania, the ferry company was charging me 260$ to change the date of my ticket when the full return ticket had been 500$!!! I was sharing the car with Adrian and Campbell, but not the driving. When I tried to drive my shift I had discovered the car was manual, after almost stalling it I was spared the task. So after they had changed their tickets, and paying a good fee for that, I discovered that a flight ticket would be 170$. They both agreed that I could take the cheaper flight home instead of paying the rip off to change the ferry, so they dropped on the way to Devenport near the airport and we met back in Sydney.
All the photos were taken by the different members of the group, it was lost already who shot what. A video will come at some point too.

PS, the epilogue and video can be read and watched HERE