A long paddle in preparation for a longer one

There is this trip we are going in a few weeks. It is along the "most dangerous coast of Tasmania" according to some. The idea is to paddle long days... long days for me as I usually just go for a max of 20km of playful paddle and call it a day.

Anyway, as a preparation for the real trip and to get to know the others in the team better we did this weekend trip of almost 40km each day with the kayaks loaded as if we were going for the 2 weeks of the real trip. So I packed cloth for very cold nights although here it was reaching above 30 degrees. I packed food for 12 days, the winter sleeping bag and tent and all the other stuff you would take for an almost 2 weeks long unsupported paddle in a remote area and went away for a just 2 days.

We met Saturday morning at Currarong and my first panic attack started when I spread all the gear on the floor beside the kayak. I was almost shaking, with cold skin under the scorching sun while wondering how all ‘that’ would fit in. I was not taking my Aquanout that certainly would not have fitted all needed. Instead I borrowed a kayak from Barnabas’ fleet, an Ocean Rider named Naughty, don’t ask me why. He has lent me the kayak for the Tassie trip. Thank you Barnabas, some people think you are crazy in lending me a kayak but I will prove them wrong when I bring it back... does it need to be in 1 piece? Back at Currarong, I took a few deep breaths and after swearing for half an hour all the gear had been “swallowed” by the wide Naughty. It was easier than I suspected and Stuart has promised me that the panic attacks will become less severe as the trip progress.

The plan was to paddle around 40km but we shortened the route to avoid getting to the more populated area of Sussex. On the map it would be a bit over 30km but we explored so many inlets and caves that the GPS showed 39km paddled at the end of the day 1 and 38 for day 2. 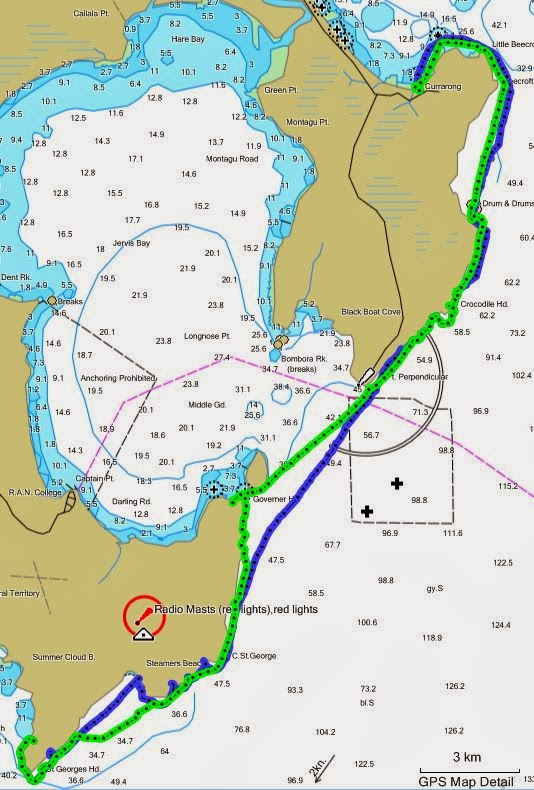 The weekend before I had paddled 32km in my Aquanaut and by the end of it I was very tired. During that paddle, around the 25km mark, I landed on a beach because I needed to stretch my back. So I lied down on a rock and without realising I slept for 15 minutes. With that memory fresh I was a bit worried about paddling 40km but I am happy to report that I survived it pretty well on Saturday, except for my bottom. It was not the same on Sunday when Matt and I raced 3 times for a few km each time. The first 2 were on following seas and the last one was to the finish line on virtually flat water. I must disclose that he was paddling his Tiderace Pace 17 that is supposed to be one of the fastest sea kayaks around and I was riding Naughty. I will not disclose who won as to not embarrass him :-). However my hat is off to Stuart that in one of the following seas runs smoked us both by several boat lengths paddling his 15 years old Nadgee. I felt all that racing by the end of the day and on Monday I was a collection of sore muscles.


The coast we paddled is one of the nicest coasts I know, not that I know that many. It is along a navy firing range, not active when we were there, and a national park. There are not many places to land along the way and you are always between the ocean on one side and cliffs climbing around 100 meters on the other, except a stretch of 4 km of open crossing where we had our ‘races’. The ocean carved amazing features in the cliff face including caves and many rocky features. All the time I was tempted to take closer looks but I resisted to put the lent kayak on too much of a risk. However we did some investigative paddling and we went through a couple of tunnels carved inside the rock.

Along the way we visited 2 seal colonies and saw plenty of aquatic birds including eagles. On Saturday we were 'attacked' by a bunch of flying fish jumping off the water and above our heads in high. At one point I was paddling and one of the flying fish jumped in front of my kayak. I looked again and there was a shape under the place where the fish jumped from. As I approached I could see clearly the shape of a hammerhead shark. When I was almost on top of it I reacted and screamed "SHARK". It seems the sound of my call travelled under water because the shark started to swim very quickly and all the others could see was the fast disappearing fin. I was not quick enough to take the camera at that point but I did use it when later we saw a group of seals sleeping.
Almost on our return point a fisherman was trying to get his prey of the day without falling to the sea. I was waiting to see if he got tired and let got of the Marlin to take it to my dinner plate. In the end I had to conform with a fish burger in Currarong's burger shop.
The weather was also amazing with warm temperatures both days, seas up to 2 meters and wind peaking on the low 20knots. We went south on Saturday and north on Sunday and the wind that blew south the first day turned 180 degrees to help us again on Sunday. What else can you ask of a weekend paddling?

Some photos were taken by Matt and others by me.