The secret file see the light

It has been a boring time lately in my blog. First was my deceased camera that took the blame, no more photos or videos for free, then it was a cold that lasted a month and now I am recovering from an operation to remove polyps from my sinuses.
Actually I was so bored today that I started to clean old files and decided to finally compile a video from a few months back when we had big rains in Sydney. There was so much water falling that the biggest dam in the area was spilling and its doors were opened to release some of the pressure.
With Barnabas we talked of going to paddle the river just after the dam and we did. I took my sea kayak and he with a friend of his and his daughter in a big barge sit on top for 3.
The beginning was not easy. Going down and up 3 times to carry all the gear from the car park to the river through a rough steep track. Was I that much stronger when I did white water in my youth or the white water slalom kayak I used to use was lighter? I think a combination of both made the track a long and hard work: 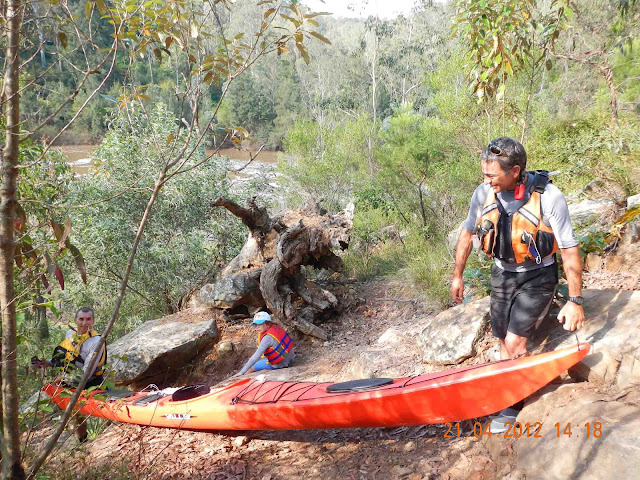 Of course we made it to the water in the end and the start was just after a series of rapids that made the water a bit noisy.
After the noisy start it was a cruise down river. I had expected the current to be more helpful and add a bit of fun but the river is a bit too wide for the speed of the water to be felt.
We planned to finish after another series of rapids between Penrith and Winsdor but we lost too much time hauling boats down to the river and we had to abort when we reached Penrith well into the night. I must admit we also started a bit too late.

Below is the video I managed from that paddle, not too exciting as others but worth to break the silence in the blog :-)